Experienced and Driven
Contact Us for a Case review

“Driving Under the Influence” (DUI) generally refers to operating a motor vehicle with a blood alcohol content (BAC) above the legal limit ― 0.08% if operating a regular passenger vehicle, 0.01% if under 21 years old or on a DUI probation. Every year, hundreds of thousands of Californians are arrested for DUI violations.

A DUI arrest will automatically trigger two separate and distinct actions against you. State Department of Motor Vehicles (DMV) (Driver’s License), and one by the County District Attorney’s office (Criminal Charges).

If you are pulled over by law enforcement and arrested for a DUI, the arresting officer is required by California law to send a sworn report to the DMV, triggering what is known as a Per Se Administrative Review of your Driver’s License.

In California, when your blood alcohol content (BAC) is 0.08% or higher, you are considered legally impaired. If the blood or breath test the arresting officer conducted indicates that your BAC is above the legal limit, it may result in a 4-month license suspension for a first offender. A second or subsequent offense within 10 years will result in a 1-year suspension.

A DUI can also cause your car insurance to be dropped and/or the rates you pay to skyrocket. A Temecula or Hemet DUI lawyer from Davis & Wojcik can protect your rights with the DMV.

After a DUI arrest, the arresting officer also prepares a police report that is automatically sent to the County District Attorney’s office for determination of whether to file criminal charges against you. DUI penalties and charges vary depending on the circumstances, including your age, license type, and previous convictions and your BAC. An offender could face any of the following:

If the DUI involved an injury or property damage, the penalty could include anything from time in the County Jail to a term in State Prison. In addition, there are increased penalties the defendant had prior misdemeanor DUI’s or prior felony DUI’s in the last 10 years.

California’s DUI laws also apply to medications. It does not matter if illegal drugs are involved. Prescription medication, over-the-counter medication, or drugs with excessive alcohol in them (such as cough syrup) can all lead to a DUI arrest. 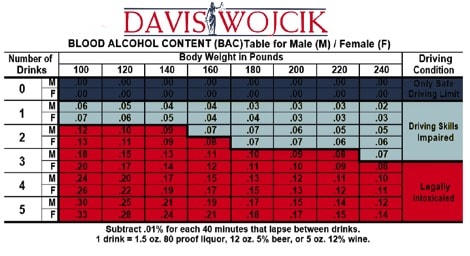 For drivers under 21 years of age, California has a “Zero Tolerance Law,” which prohibits blood alcohol content of 0.01% or higher. DUI offenders under 21 years old face strict penalties including, a one-year license suspension, criminal charges, DUI school and hundreds of dollars in fines.

DUI convictions stay on your driving record for 10 years. Fortunately, the Temecula and Hemet DUI lawyers of Davis & Wojcik can provide expungement services so that you can once again have a clean record with a sealed conviction.

Are your charges based on the alleged use of drugs rather than alcohol? Was your arrest part of an injury or fatal auto accident, leaving you vulnerable to a charge of vehicular homicide? Are you accused of refusing a breath or blood test? We can handle any aspect of the broad spectrum of charges that a DUI case can bring. The Temecula and Hemet DUI attorneys of Davis & Wojcik will fight for your rights.

We need to hear your side of the story. Your initial consultation with Davis & Wojcik, a Professional Law Corporation, will answer a lot of questions. To schedule an appointment, contact us today by phone at (951) 587-2222 or by email message.

Contact Us
Practice Areas
Client Reviews
★★★★★
My husband and I hired DWD to do our Last Will and Testament. We went in not knowing what to expect or how to distribute our estate upon our passing. Each of our questions were answered quickly and to our satisfaction. Things we thought were complicated were worked-out very simply because of their vast experience and knowledge. I highly recommend DWD for Wills, Trusts, etc. Donna
★★★★★
Mr. Davis is one of the most talented & passionate attorneys that I have ever met. His entire team is truly amazing! I was referred to his law firm through a friend of mine, and I'm convinced he is one of the the best criminal defense attorneys in Southern California. Michele
★★★★★
During an employment dispute, I sought help from an Attorney. Choosing a strong, local firm was important to me. Mr. Thompson of DWD is a knowledgeable, supportive attorney who took the time to answer my questions, investigate, and advocate on my behalf. I highly recommend Dan Thompson if you are ever in need of legal advice or assistance. Michelle
View More
Submit a Law Firm Client Review